BE SEEN. BE SAFE. THE PULSELITE® SYSTEM REDUCES BIRD STRIKES.

Our Pulselite® technology is available and certified for a wide variety of aircraft, large and small, fixed wing and rotor, the Pulselite switch is designed to pulse your aircraft’s existing lights.

SEE THE PULSELITE® SYSTEM IN ACTION 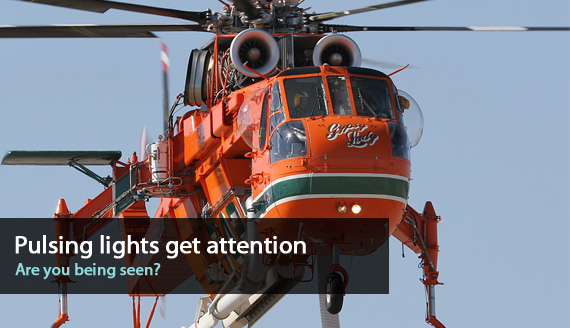 WHAT DOES IT TAKE TO GET NOTICED?

For over 20 years, the answer has been the Pulselite® System.

THE SAFETY OF YOUR PASSENGERS

Amid increased air traffic and ground lighting, the safety of your passengers often times depends on how well other pilots see your aircraft.

84% of all business aviation aircraft are equipped with a Pulselite® system.

It’s really quite simple: if you see it you can avoid it. What are you doing to make yourself more visible? Enhance the capability of your Onboard Collision Avoidance System and increase lamp life up to 5 times.

REDUCE THE LIKELIHOOD OF BIRD STRIKES

Give birds more time to better discern aircraft position and speed, so as to reduce collisions.

CERTIFIED FOR MOST AIRCRAFT

FAA approved with Supplemental Type Certificates (STCs) for virtually all corporate, general aviation, rotorcraft and commercial aircraft, the Pulselite® is installed on more than 25,000 aircraft worldwide. Backed by a complete engineering department, Precise Flight has sample wiring diagrams available, or can create one for your specific application.

According to the FAA, bird strikes to helicopters have increased more than 700% since the early 2000’s. Additionally, Helicopter Association International reports that air medical services are now reporting an average of one bird strike every week – and the problem is getting worse.  The US Fish and Wildlife has warned the rotorcraft industry that Canada goose populations in North America increased from 500,000 in 1980 to over 3.8 million today. During the same period, the Snow goose population increased from 2.1 million to 6.6 million.

Precise Flight’s Pulselite® System is the only FAA-certified onboard solution proven to substantially reduce bird strikes, and greatly improve aircraft recognition to other pilots.

Maverick Helicopters, one of the largest fleet operators in the country, recently published a case study highlighting their 8 year test and success with using the Pulselite System to eliminate major bird strikes. Click here to read their case study or follow this link to read the 2018 Winter ROTOR Magazine article featuring Maverick’s experience with the Pulselite System.

Airbus Helicopters, Inc. is the most recent global aviation company to install the Pulselite® System on their models (see attached press release). In the US, Canada and Australia, the Pulselite® System is required aboard all firefighting helicopters with government contracts. It is also required equipment to be a member of T.O.P.S. (Tour Operators Program of Safety).

WHAT OUR CUSTOMERS SAY ABOUT THE PULSELITE® SYSTEM

Prior to installing the Pulselite System, we were experiencing a near fatal bird strike every two years.

In addition to its effectiveness in reducing bird strikes, the Pulselite System significantly increases the conspicuity of our helicopters, and that makes flying much safer for everyone. It’s a very easy installation, and I believe the Pulselite System is a must-have for safety.”

“Airbus Helicopters is committed to being the industry leader in safety and innovation. Bird strikes are a growing problem for helicopter operators. We are optimistic that the Pulselite System will help reduce the number of occurrences and we are proud to offer it as an option to our customers.”

“We purchased the Pulselite System for the extra safety margin it afforded us by making us more visible, especially during daylight, to other aircraft operating in proximity to us.

In many police aircraft operations, multiple media aircraft converge on our scenes. Using the Pulselite System gives us additional peace of mind that we will be seen and avoided.”

“The Pulselite System is installed on our entire fleet because it significantly enhances the safety of our pilots, employees, and customers.

The increased visibility created by the Pulselite System decreases the threat of midair and ground collisions and significantly reduces the frequency of bird strikes. The Pulselite System is ultra-reliable, easy to install and it performs well in any condition.

I believe it should be a standard safety measure on all rotorcraft.”

“Pulsing exterior lights have been proven to reduce bird strikes, and it absolutely helps in collision avoidance by maximizing aircraft visibility.

I support all technologies that increase flight safety, and pulsing exterior lights is an important one.”

“For more than twenty years, the Tour Operators Program of Safety – or TOPS – has been dedicated to enhancing helicopter tour safety by requiring our members to meet requirements above those set by the FAA. The result has been a cumulative safety record much higher than that of general aviation. One such TOPS requirement is alternating avoidance lighting to increase aircraft visibility and decrease the chance of midair and ground collisions. Many of our members choose to use the Pulselite System to meet this requirement.”